With a few days of walking and sightseeing in Halifax, we decided that a day trip by car might be a good change. And in contrast to the previous day’s downpour, we were promised a bright, sunny day – a perfect chance to get outside. We opted for two well-known tourist destinations west of Halifax: Peggy’s Cove and Lunenburg.

Peggy’s Cove is a small rural community located on the eastern shore of St. Margaret’s Bay, which is famous for the Peggy’s Point Lighthouse (established 1868). It is 26 miles southwest of Downtown Halifax and comprises one of the numerous small fishing communities located around the perimeter of the Chebucto Peninsula. The community is named after the cove of the same name, a name also shared with Peggy’s Point, immediately to the east of the cove. The village marks the eastern point of the St. Margaret’s Bay, the red dot right above the words NOVA SCOTIA on the map below.

The first recorded name of the cove was Eastern Point Harbor or Peggs Harbor in 1766. The village is likely named after Saint Margaret’s Bay (Peggy being the nickname for Margaret), which Samuel de Champlain named after his mother Marguerite.

This overview gives a sense of the scale of the place – essentially a big extrusion of granite being constantly beaten on by the wind and ocean, with a lighthouse to give warning and a small collection of buildings that were likely originally about fishing but today mostly support tourism. The Atlantic sweeps up the eastern seaboard and beats pretty hard on this coastline. There’s no breakwater.

The iconographic lighthouse seems too small for the setting but I guess it’s anchored well enough to not be blown away. There are probably several hundred thousand pictures like this one in digital collections around the world.

Here’s another view, from the approach road. 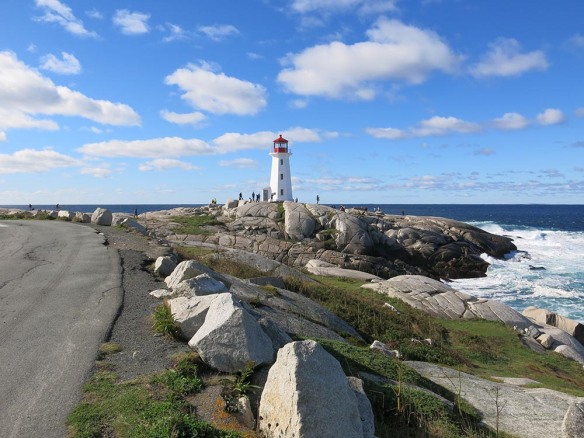 Of course, in today’s world, you have to time your shot.

We had arrived just barely in advance of the first wave of landliners and tourists. From its inception, the community’s economy revolved around fishery. However, tourism began to overtake fishing in economic importance following the Second World War. Today, Peggy’s Cove is a major tourist attraction, although its inhabitants still fish for lobster, and the community maintains a rustic undeveloped appearance.

Looking back towards the restaurant you get a clear sense of the way in which the granite boulders have been strewn across the landscape. More than 400 million years ago, in the Devonian Period, the plate tectonics movement of the Earth’s crust allowed molten material to bubble up from the Earth’s interior. This formed the rocks we see today and are part of the Great Nova Scotia batholith.

The unique landscape of Peggy’s Cove and surrounding areas was subsequently carved by the migration of glaciers and the ocean tides. 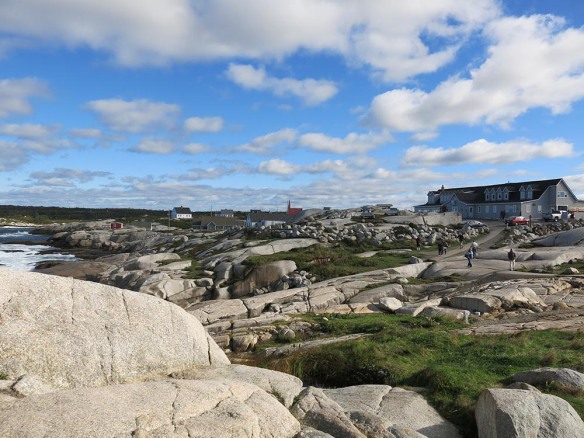 The village was founded in 1811 when the Province of Nova Scotia issued a land grant of more than 800 acres (320 ha) to six families of German descent. The settlers relied on fishing as the mainstay of their economy but also farmed where the soil was fertile. They used surrounding lands to pasture cattle. In the early 1900s the population peaked at about 300. The community supported a schoolhouse, church, general store, lobster cannery and boats of all sizes that were nestled in the cove. The photo below shows the tourism restaurant on the left and ‘village’ buildings scattered to the right.

If you’re willing to get a bit off the path to the lighthouse, you can get up close and personal with some of this geology. The view below shows the way in which the undulations trap pools of water between tides.

Closer to the shoreline there’s a clear warning about “sneaker” waves.

Of course, the black rocks are the ones that attract some people – it was such a beautiful day, what could the harm be?

I found some of the layering, fault lines and smooth-rough contrast intriguing. 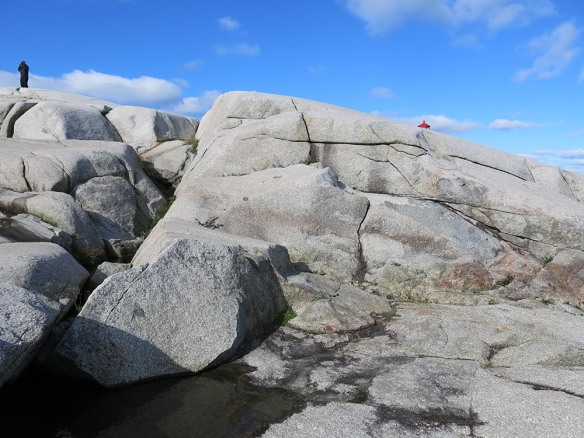 And of course, here and there, signs of determination and resilience – hard to believe. 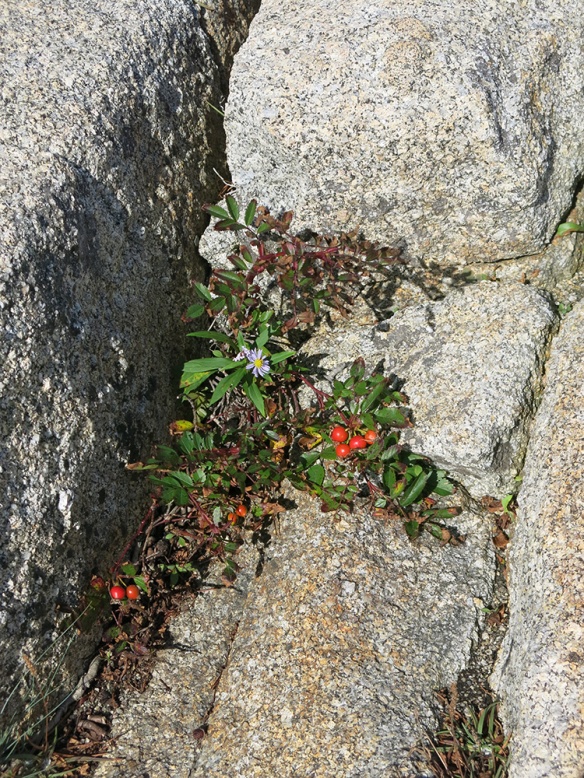 We headed back inland towards Lunenburg. It didn’t take long for the landscape to show it’s softer side where soil had been able to accumulate around the boulders.

And once we reached the main road and rounded a bend, a view back put things in scale.